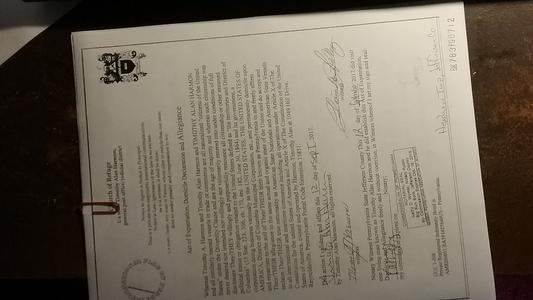 Notice to Agent is Notice to Principal
This is a private non-negotiable international communication;
Notice is Law; ignorance of the law is no excuse;
as it is written; it shall be done;
i; a man, claim: any man or Person whom alter or restyle this; our issue;
does so under penalty and compensation to we;

Whereas Timothy A. Harmon and Timothy Alan Harmon and TIMOTHY ALAN HARMON and all similarly named vessels in trade or commerce are all naturalized “citizens of the United States” under the Diversity Clause and are the age of majority and whereas such citizenship was never desired nor intended nor willingly nor voluntarily entered into under conditions of full disclosure They/THEY willingly and purposefully renounce all citizenship or other assumed political status or obligation related to the United States defined as “the territories and District of Columbia” (13 Stat. 223, 306, ch. 173, sec. 182, June 30, 1864) and its government, a corporation doing business variously as the UNITED STATES, THE UNITED STATES OF AMERICA, District of Columbia Municipal Corporation, etc., and permanently domicile upon and repatriate to the soil of Their/THEIR birth known as Pennsylvania in and freely affirm Their/THEIR allegiance to the same actual and organic state of the Union and do accept and reclaim Their/THEIR true nationality as American State Nationals and American State Vessels in all international and maritime commerce including all operations under Article X of The Constitution for the united States of America and Article X of The Constitution of the United States of America, owned and operated by Harmon, Timothy Alan at 1049 Hill Drive, Reynoldsville, Pennsylvania Postal Code Extension 15851.

Notary Witness Pennsylvania State Jefferson County This _____day of ________ 2017 did visit one living man known as Timothy Alan Harmon and he did establish this Act of Expatriation, Domicile and Allegiance freely and without coercion, in Witness whereof I set my sign and seal: ____________________________Notary; 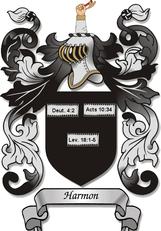